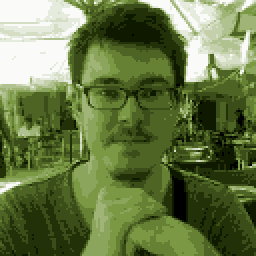 I'm a french guy who spent most of his life playing videogames and learning computer stuff. Those two passions had to collide at some point.

I grew up with early 3D games, which I'm pretty fond of. The transition from 2D to 3D gave birth to a lot of innovative and fun games, but it's the particular atmosphere and the strange and phantasmagorical worlds of these games that I like. The simplicity of forms and textures leaves a lot of room for imagination, and the game experience is better because of it.

Although I discovered it later, I'm also passionate about the NES era. The technical limitations of the console, from visuals to the controller, forced the developers to stay simple with the conception of the games, which focus on the essential.

After spending my teenagehood on learning C++ and fiddling with editors like RPG Maker, Doom Builder or CryEngine, my journey as a game developer began in 2009 with Worlds. A pretty ambitious project which helped me learn a lot of things, but took seven years to complete.

My views on video games

I focus on crafting open-ended games, with a lot of emphasize on player agency.

My games are focused on gameplay. Often in a blending of free exploration and fun, accessible and challenging action. I'm not necessarily trying to conceive innovative gameplay mechanics, I rather try to offer interesting worlds to explore, full of secrets and challenges in which players can simply have fun.

Regarding storytelling, I favor a discreet approach to let the player discover and understand the game world by themselves. Environmental storytelling, reading of diaries or other writings and optional dialogs are often more suitable to me than cutscenes or scripted gameplay sequences. To summarize, I prefer to offer a context for the player to play in rather than to tell them a story.

How do I work?

I'm a real lone wolf when it comes to creating games; I craft the engine, draw the graphics and try my best at composing music.

I use the Irrlicht Engine for my 3D needs. It's a cross-platform, easy to use 3D engine, which keeps things pretty basic; a good and solid base for anything I want to craft.

For my 2D projects, I use SDL, a solid value which leaves me in control of the engine.
I also created a few smaller games with Pygame, which is an awesome starting point if you're interested in making games.